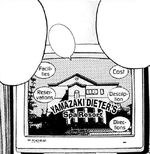 The Yamazaki Dieter's Spa Resort is a "dieter's paradise specializing in fun and easy dieting solutions". Located in Izu, the spa is run by Chitose Yamazaki.

The spa is actually a scam, designed by Chitose to coerce dieters into spending money on eccentric dieting schemes that have little to no effect.

Retrieved from "https://ailoveyou.fandom.com/wiki/Yamazaki_Dieter%27s_Spa_Resort?oldid=5150"
Community content is available under CC-BY-SA unless otherwise noted.