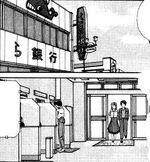 Whale Bank is the local bank used by Hitoshi Kobe. Through the bank, Hitoshi keeps his life savings and pays various bills electronically through the bank.

After Saati illegally increased Hitoshi's bank holdings, Hitoshi sent her to fix the mistake before it was found. Accessing the bank via Cyberspace Saati managed to fix the error but had a close encounter with the bank's electronic security in the process.
Later on, after Saati had forgotten to pay various bills, Forty Namba also visited the bank via Cyberspace to send the bills before power was shut off to their residence.

The Whale Bank's appearance is based off of the Inadazutsumi Branch of Yokohama Bank. The building has since been renovated and has changed its appearance.

Retrieved from "https://ailoveyou.fandom.com/wiki/Whale_Bank?oldid=4522"
Community content is available under CC-BY-SA unless otherwise noted.