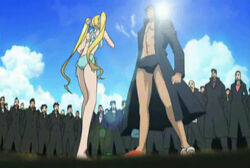 The Thugs are a group of Yakuza-like hoodlums who cross the paths of Santa and Mai several times in Itsudatte My Santa!.

Initially encountered during Christmas, after Santa caused the leader to drop his Christmas cake the group began assaulting him before being assaulted in turn by Mai and buried underneath a pile of Sanma. During summer the following year, the group also ran into Sharry, who caused the leader to drop his watermelon, unfortunately before they could assault her she buried them under a gigantic Watermelon.

Retrieved from "https://ailoveyou.fandom.com/wiki/Thugs?oldid=5667"
Community content is available under CC-BY-SA unless otherwise noted.