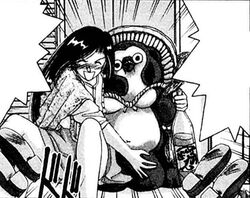 A Tanuki is a Japanese subspecies of the East Asian Raccoon dog (named for it similarity in appearance to the Raccoon).

The animal has been significant in Japanese folklore since ancient times and is reputed to be mischievous, jolly, a master of disguise and shapeshifting, but is somewhat gullible and absentminded.

The tanuki were originally deified as governing all things in nature, but after the arrival of Buddhism, animals other than envoys of the gods (foxes, snakes, etc.) lost their divinity and were seen as evil or as monsters. However, since the tanuki of Japan do not have a fearsome image, their image took the form of a more humorous kind of monster, and even in folktales like Kachi-kachi Yama, and Bunbuku Chagama, they often played the part of foolish animals

Retrieved from "https://ailoveyou.fandom.com/wiki/Tanuki?oldid=4514"
Community content is available under CC-BY-SA unless otherwise noted.