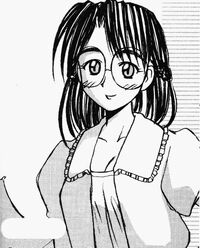 Takako Miyahara is a first-year student of Class 1-C at Menjō High School and a member of the School Newspaper.

Skilled with a camera, Takako desires the pursuit and resolution of mysteries; reporting them in the school newspaper. She is reputed for being ruthless in her pursuit of a story and lauded for being willing to do anything to get a scoop.

While skipping homeroom and taking a nap in the school's media center, Takako witnesses Saati entering a computer to retrieve Hitoshi's homework from his personal computer at his house. Excited over the possibility of a story, Takako began stalking Hitoshi in an attempt to catch him or Saati doing anything beyond normal.
At the same time, a Panty Thief was on a spree in Kawasaki City and, when Takako took to stalking the Kobe Residence, Takako encountered the thief only to be caught by Toeni who had a laid a trap for him.

While she managed to convince the family that she was pursuing the thief instead of them, Takako became the thief's target after she accidentally snapped a photo of him during their encounter.
Returning to school and continuing her pursuit of Hitoshi, she dresses herself as a beauty and invites him on a date. Unfortunately without her glasses she is nearly blind and sits beside the panty thief, thinking he is Hitoshi. As the thief assaults her in an attempt to get back the photos she took of him, Saati distracts him by offering to show him her panties while Toeni zaps him with her powers after Takako loses her glasses again.

Retrieving the photo negatives that were dropped during the struggle, Hitoshi gives Takako back her photos which she uses to out the panty thief in the local newspaper. Now an even bigger celebrity at school, Takako thanks Hitoshi and Saati and vows to continue pursuing them until she solves the mystery surrounding them.

Retrieved from "https://ailoveyou.fandom.com/wiki/Takako_Miyahara?oldid=5635"
Community content is available under CC-BY-SA unless otherwise noted.