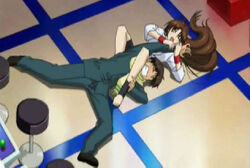 Sambo is a Russian martial art and combat sport that was developed in the early 1920s by the Soviet Red Army to improve their hand-to-hand combat abilities. Intended to be a merger of the most effective techniques of other martial arts, Sambo has roots in Japanese judo, international styles of wrestling, plus traditional folk styles of wrestling such as: Armenian Kokh, Azerbaijani Gulesh, Georgian Chidaoba, Kazakh Kures, Mongolian Khapsagay, Kyrgyz Kurosh, Tatar Köräş, and Uzbek Kurash.

Retrieved from "https://ailoveyou.fandom.com/wiki/Sambo?oldid=5662"
Community content is available under CC-BY-SA unless otherwise noted.