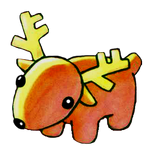 Pedro is a magical reeindeer and pet to Mai.

In all outwards appearances, Pedro is a stuffed reeindeer toy that Mai carries with her but during Christmas, when Mai's powers are at their strongest, Pedro transforms into an adult male reeindeer that is tasked with pulling Mai's santa sleigh.

When Mai is in her teenager form, due to a lack of magic, Pedro retains the form of a reindeer plush toy which Mai carries around with her.

When Mai gains full use of her magic, in addition to becoming adult she can transform Pedro into a full male reindeer to pull her sleigh.

Pedro also possesses the ability to transform into a colossal humanoid robot.

Pedro appears in Love Hina on the tag of a Christmas present Keitaro Urshima sent to Naru Narusegawa on their first christmas together.

Retrieved from "https://ailoveyou.fandom.com/wiki/Pedro?oldid=5659"
Community content is available under CC-BY-SA unless otherwise noted.