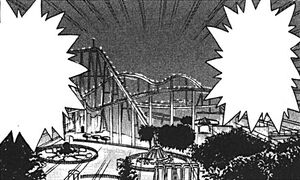 The Odaiba Amusement Park is an unnamed amusement park located in Odaiba district of Tokyo.

With her initial rivalry with Saati Namba over possession of Hitoshi Kobe coming to a head, Toeni Namba kidnapped Hitoshi and took over the park as a challenge against her younger sister.
Dubbing the park "Toniland", Toeni attempted to hide out within the park's Penguin Castle and lure Saati into a steam trap. However, Saati wondered into the park's Haunted House, instead.
After an attempt to attack Saati using the Haunted House's animatronic robots failed, Toeni attempted to sic an army of robot pirates upon her sister, however, the army's short extension cords limited their mobility.
Attempting to escape using a carousel horse proved equally futile and Toeni forced Hitoshi to ride the park's Scream Machine roller coaster as recompense.

As the two girls argued, the coaster inadvertently paused on the track while upside-down, causing the occupants to dangle from the carriages. After saving each other, Toeni conceded that Saati and Hitoshi were made for each other and withdrew her claim on him. 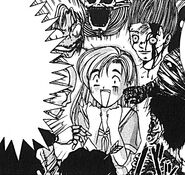 Add a photo to this gallery
Retrieved from "https://ailoveyou.fandom.com/wiki/Odaiba_Amusement_Park?oldid=5513"
Community content is available under CC-BY-SA unless otherwise noted.