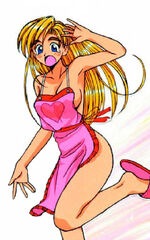 The Naked Apron, also called Hadaka Apron, is the practice of wearing a coventional apron over a nude body. It is a popular concept for both pornography and fanservice.

The design of the practise is based on the theme of domestic sexuality; involving levels of modesty, seduction, and submissiveness. The idea of a woman subtly seducing her lover by surprising him that behind the apron she isn't wearing anything. The practise is frequently used in the media for erotic surprises; allowing the character to appear with modesty preserved from the front but with a risqué surprise for the viewer when they turn around.
While the practise largely entails that the practitioner is naked underneath the apron, variants can feature the practitioner wearing undergarments, Lingerie or a swimsuit underneath instead. 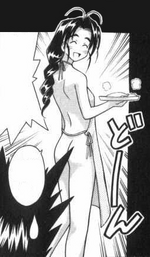 Keitaro has various dreams where Naru and Mutsumi are wearing nothing but aprons. 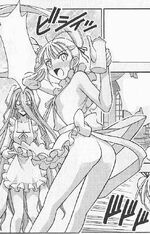 Setsuna Sakurazaki's Cosmo Entelecheia reality has her living with Konoka Konoe who wakes up half asleep and puts on a naked apron to make Setsuna breakfast.
In an attempt to attract Fate, Homura and Shirabe put on naked aprons to gain his attention.

Retrieved from "https://ailoveyou.fandom.com/wiki/Naked_Apron?oldid=5506"
Community content is available under CC-BY-SA unless otherwise noted.