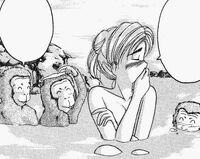 While staying at the Kobe Onsen, Saati entered the men's hotspring in an attempt to spend some time with Hitoshi, however, the individual she was conversing with actually turned out to be a Hot Springs Monkey.

While it is unknown what immediately happened after she discovered the monkeys, she is later found unconscious in her bed revealing that she either feinted or knocked herself out somehow.

Monkeys were encountered by the Hinata Residents after the group crashed near a hot spring near the forests of Mount Fuji.
The primates promptly stole the girls' clothes while they bathed and also took Naru's Engagement Ring. While the girls chased after them, another monkey also acquired Motoko's Hina Blade, resulting in it getting temporarily possessed by the demonic sword before Motoko could take the sword back again.

While exploring Kyoto, Negi Springfield is accosted by Chigusa Amagasaki; a rebel talisman user who specializes in using monkeys to assist in her work.

Retrieved from "https://ailoveyou.fandom.com/wiki/Monkeys?oldid=5655"
Community content is available under CC-BY-SA unless otherwise noted.