Due to her weak magic, Mai is only able to magically produce Sanma in the manga. However, in the OVA she can produce anything beginning with "San" (due to it being the same as "San"ta) such as Sanma, Sanbo, Sansetsukon, a Sanba line and a Sankaru Dressingroom. 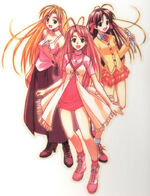 Retrieved from "https://ailoveyou.fandom.com/wiki/Mai?oldid=5675"
Community content is available under CC-BY-SA unless otherwise noted.