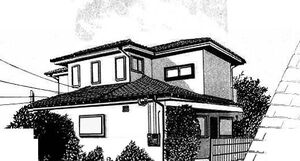 The Kobe Residence is a residence in Kawasaki City, south of Tokyo, where Hitoshi Kobe lives.
After his parents and sister moved to Massachusetts due to work, Hitoshi opted to stay due to his father's Reality Module residing in the residence's basement.

Following the arrival of Saati Namba, Toeni Namba and Forty Namba, Hitoshi shares the residence with the three A.I. girls.

A two-story household apartment, the ground floor holds the kitchen, dinning and lounge areas while the upper floor possesses the bedrooms and bathroom.
Featuring a small backyard, Hitoshi's room possesses a small balcony that overlooks the yard.

Hitoshi has kept the same room from when his family lived in the house. He keeps his computers in the room opposite his bed, underneath which he keeps his varous Adult Magazines.
When Toeni arrived, she took to sleeping nude in Hitoshi's bed due to not having a bed of her own.

Following Forty's arrival and adoption into the household, he/she made this room his/her own. It is the cleanest room in the house.

The bathroom is a standard Japanese bathroom. Toeni once filled the entire room from floor to ceiling with water in an attempt to stop the roof from leaking.

Presumably the master bedroom that was once used by Hitoshi's parents, Saati was given this room to sleep in when she gain physical form and began living with Hitoshi.
When Puppy lived in the house she built a baby-themed corner in her room, complete with a crib, for Puppy to sleep in.

Accessible via a trapdoor in the kitchen, the basement contains an IBN Spartacus 5568 super computer which Hitoshi's Personal Computer and the A.I. girls are linked to.

The residence is based on a house in Miyamae-ku ward of Kawasaki City just south of Tokyo. It is the home of Akamatsu's former chief assistant. The house has since been demolished and replaced with a new building.

Retrieved from "https://ailoveyou.fandom.com/wiki/Kobe_Residence?oldid=4478"
Community content is available under CC-BY-SA unless otherwise noted.