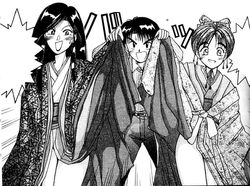 The Kimono (着物) is a traditional Japanese multi-layered gown worn by men, women and children.

Also known as Gofuku ("Clothes of Wu"), the kimono's design originated from traditional Chinese clothing from the Han dynasty around the 5th century.
The design evolved through the ages, becoming increasingly stylized during the Heian period (794 -1192) though they still wore the "mo" (an apron) over the front. By the Edo period (1603-1867), the sleeves became larger and the "obi" (belt) became wider with various styles of tying coming into fashion.
Come the Meiji period the kimono was replaced by western clothing as the most common garment in Japan, though kimono still exist as formal wear.

There are many different styles of Kimono; range from extremely formal to casual. The level of formality of women's kimono is determined mostly by the pattern and colour of the fabric. Young women's kimono have longer sleeves, signifying that they are not married, and tend to be more elaborate in colour than older women's kimono.
Formality is also determined by the type and colour of accessories, the fabric (which is usually silk though cotton and polyester can also be used), and the number of family crests in the pattern (with five crests signifying extreme formality).

Retrieved from "https://ailoveyou.fandom.com/wiki/Kimono?oldid=4968"
Community content is available under CC-BY-SA unless otherwise noted.