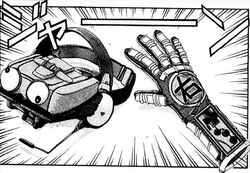 The Hyper Linking System is an aparatus concepted and invented by Hitoshi Kobe to enable him to see and interact with Cyberspace through Saati Namba, Toeni Namba or Forty Namba.

Through the Hyper Linking System, Hitoshi is able to venture with the A.I. girls through cyberspace and in doing has assisted the girls when obtaining school data for Yuuko Watanabe and when Saati first ventured into the Internet to search for information on Sayo Ishihara.

Retrieved from "https://ailoveyou.fandom.com/wiki/Hyper_Linking_System?oldid=5164"
Community content is available under CC-BY-SA unless otherwise noted.