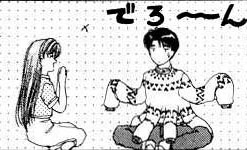 Hitoshi's Sweater is a woolen sweater hand-made by Saati Namba as a present for Hitoshi Kobe on his birthday.
Hand made by Saati, the sweater, though made with love, possesses numerous arms; much like an octopus. It is unknown wether this was a design mistake by Saati or a quirky decoration feature she decided to incorporate into the sweater.

As his birthday approached, Hitoshi began to notice that Saati was acting distant and distracted, as well as hiding in her room a lot. After being warned by his classmates that he might lose her as a girlfriend if he didn't pay more attention to her, Hitoshi began suspecting that she was seeing another guy.
It was later revealed, however, that she was actually secretly taking knitting lessons in order to make a sweater for Hitoshi as a present; secretly completing the sweater within the secrecy of her room.

Add a photo to this gallery
Retrieved from "https://ailoveyou.fandom.com/wiki/Hitoshi%27s_Sweater?oldid=5511"
Community content is available under CC-BY-SA unless otherwise noted.