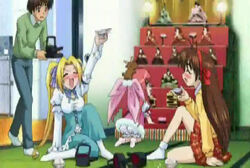 Hinamatsuri, also called Doll's Day or Girls' Day, is a special holiday celebrated each year on March 3rd in Japan.

The intention of the day is to pray for the growth and happiness of young girls in the country. It is also known as "Momo no sekku (Peach Festival)" due to the peach blossom season on the old lunar calendar occurring at the same time.
Most families with girls display "hina-ningyo" (special doll dioramas for Hinamatsuri) and dedicate peach blossoms to them. The dioramas are usually arranged on a five or seven-tiered stand covered with a red carpet. At the top are the Emperor and Empress. The next step contains three court ladies (sannin-kanjo), followed by five musicians (gonin-bayashi), two ministers (udaijin and sadaijin), and three servants ending the bottom row in a five-tiered display. There are also small pieces of furniture, small meal dishes, and other things that are arranged around the dolls on each tier.

The custom of displaying dolls as part of the holiday began during the Heian period, where the people believed that the dolls possessed the power to contain bad spirits. In an ancient Japanese custom called hina-nagashi ("doll floating"), the straw dolls were set afloat on a boat and sent down a river to the sea, taking troubles or bad spirits with them.
As the festival has grown over the years the dolls have become more elaborate and more expensive. One can guess that people no longer want to set these little treasures to drift on a river. The trend now is to display the dolls on the house and save them for the following years' festivals.

Families generally start to display the dolls in February and take them down immediately after the festival. Superstition says that leaving the dolls past March 4 will result in a late marriage for the daughter.

Optional are the two lampstands, called bonbori (雪洞), and the paper or silk lanterns that are known as hibukuro (火袋), which are usually decorated with cherry or ume blossom patterns.

Accessories placed between the ladies are takatsuki (高坏), stands with round table-tops for seasonal sweets, excluding hishimochi.

The third tier holds five male musicians gonin bayashi (五人囃子). Each holds a musical instrument except the singer, who holds a fan.

Left to right, from viewer's perspective, they are the:

The fifth tier, between the plants, holds three helpers or samurai as the protectors of the Emperor and Empress. From left to right (viewer's perspective):

These are items used within the palatial residence.

These are items used when away from the palatial residence.

Retrieved from "https://ailoveyou.fandom.com/wiki/Hinamatsuri?oldid=5103"
Community content is available under CC-BY-SA unless otherwise noted.