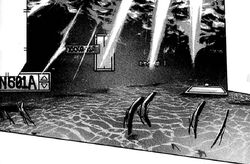 Cyberspace is a digital realm which all electronic networks are linked and connected with.

Best described as the "behind the scenes" of the internet, cyberspace can only be accessed by programs, who view the realm as an ocean within which individual computer systems and servers are represented as "worlds" that can be accessed via portal doors within the ocean. The size and nature of the ocean varies depending on the size and nature of the digital network being accessed.

Programs themselves are also represented via ocean-themed avatars such as dolphins, fish, manta-rays, jelly fish and sharks depending on their natures.

In Negima! Magister Negi Magi, Chisame Hasagawa is able to access Cyberspace through her Laptop Computer with the aid of her Pactio artifact; a magical staff that, among other things, gives her control over digital networks when used in conjunction with her laptop.
Chisame enters cyberspace to do battle against the sentient robot Chachamaru Karakuri during the Mahora Festival arc.

Retrieved from "https://ailoveyou.fandom.com/wiki/Cyberspace?oldid=5336"
Community content is available under CC-BY-SA unless otherwise noted.