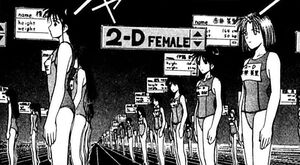 Also called Vital Statistics and abbreviated to BWH, Bust/Waist/Hip Measurements are a common method of specifying body proportions for the purpose of fitting clothes and indicating physical appearance. Usually used to depict women, the three sizes are the circumferences of the Bust, Waist and Hips; usually rendered in centimeters or inches.

Breast volume, or cup size, will further detail a woman's figure. A woman with measurements of 32A-27-36 (Bust:33, A cup, Waist:27, Hips:36) inches will have a different body shape than a woman with measurements of 32C-27-36 (Bust:35, C cup, Waist:27, Hips:36) inches due to the former woman's rib cage being about 30 to 32 inches in circumference (according to the 32), with a full bust measurement of 33 inches, the A being an inch of difference in the circumference between the fullest part and the band no. The latter woman's rib would be about 30 to 32 inches around and a full bust measurement of 35 inches. The result is that the latter woman’s breasts will appear "bustier" and her hips larger than the former woman even though their BWH measurements are both 36-25-38 inches. 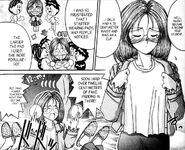 Retrieved from "https://ailoveyou.fandom.com/wiki/BWH_Measurements?oldid=5617"
Community content is available under CC-BY-SA unless otherwise noted.