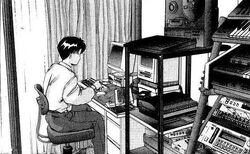 Assembly is a computer programming language that has a very strong correspondence between language that a user can understand and the computer's machine code instructions.

Originating in the 1950's, Assembly languages eliminated much of the error-prone and time-consuming first-generation programming needed with the earliest computers, freeing programmers from the tedium of remembering numeric codes and calculating addresses. They were once widely used for all sorts of programming. However, by the 1980s (1990s on microcomputers), their use had largely been supplanted by higher-level languages, in the search for improved programming productivity. Today assembly language is still used for direct hardware manipulation, access to specialized processor instructions, or to address critical performance issues.

Retrieved from "https://ailoveyou.fandom.com/wiki/Assembly?oldid=5626"
Community content is available under CC-BY-SA unless otherwise noted.