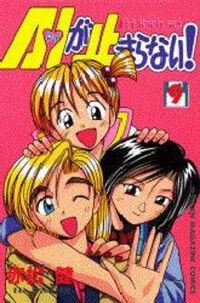 AI ga Tomaranai 0-9 is a Japan-only computer CD-ROM that features three full-colour stories made by Ken Akamatsu using the A.I. Love You characters. The CD-ROM was released on October 17th, 1997, following the completion of the main series.

The first two stories are based on two popular fairy tales, while the third is an epilogue chapter explaining where the characters are after the end of the main series.

Saati writes a letter from America to inform someone of their current situation there.

Retrieved from "https://ailoveyou.fandom.com/wiki/AI_ga_Tomaranai_0-9?oldid=5653"
Community content is available under CC-BY-SA unless otherwise noted.