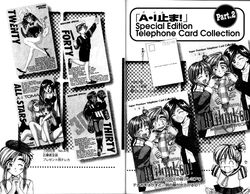 A Phone Card is a small plastic card used to pay for telephone services, particularly with public phones.

Similar in nature as a Credit Card, standard cards can be purchased with a fixed amount of credit attached. The credit associated with the card is then used to cover the charge of a phone call instead of coinage.

Various types of phone cards are availabe; from "disposable cards" which possess a set amount of credit and are discarded when used up, rechargeable cards where the credit can be "refilled", or cards fixed to a payment plan which are "refilled" or "renewed" at varying periods.

Retrieved from "https://ailoveyou.fandom.com/wiki/A.I._Love_You_Phone_Cards?oldid=5230"
Community content is available under CC-BY-SA unless otherwise noted.